The Fins’ explosive performance of dynamic rock is making a name for them with the press, the industry and audiences across the UK and abroad.

“The Fins rock with thunderous drive and gritty finesse;” Toxicpete

This Farnborough based 5 piece now have 7 UK tours and nearly 200 gigs behind them. By engaging with their audience, The Fins make new fans everywhere they go.

“[they] set the stage alight” Guilfest

The Fins aren’t shy of live TV and Radio as their interviews and performances show. They are popular with broadcasters for their spontaneous humour and clear camaraderie, which surprises, given the sometimes menacing nature of their lyrics.

‘And when you get to the end…’ is The Fins’ first album, released on 01.12.2010. It is the result of more than 12 months hard work and pain. The hard work was in the writing, rehearsing, recording and production. The pain came in the form of a bad hand injury Lawrence the drummer sustained during 3 days of laying down the drum tracks. This put him out of action for several months during 2010. Now back with more passion than ever, The Fins have already been playing the new tracks live with great success.

The Fins sold out on pre-sales alone with their first single Adaptor in October 2008. The accompanying video has been seen by thousands, bringing new followers from as far away as Australia through Rage TV. They are sure to have as much success with the new video for ‘This Is Madness’ a track from their first album. 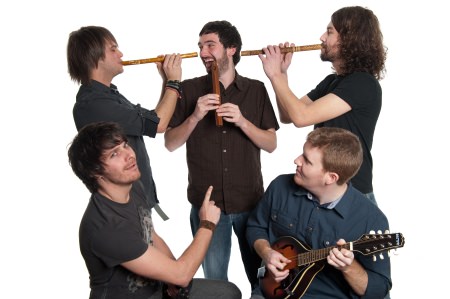 But where did it all begin?

2004 and James was in a lot of trouble. He had been in a bad relationship and had some bad habits and bad debts that needed to be sorted out. He went to a music store with a drummer friend he had played with in a previous life to sell his amp for cash.  The drummer convinced him to trade in his amp for an acoustic guitar.

James – ‘That was the single most important afternoon for me ‘cause I had gone in to the shop needing money for a old dirty life and came out the shop with a whole brand new life of opportunity and what I had always wanted.’

The drummer was Lawrence.

So James had the guitar and the will but what happened next?

Ryan was well known on the local scene for his charm, good looks (Ryan did you edit this?) and a liking for Karaoke. Yes Karaoke. He was a hugely popular performer so there’s no shame in him not having his own backing band. In any case he was earning money playing football and running a business at the time so even before The Fins came together he was a very busy man.

Rauf and Lawrence had known each other for a while, playing together in Unsmoked Shoulder and later in Ipanema, where Rauf added playing bass to his many talents.

No one seems quite sure exactly how they knew Paul (AKA Macca). According to a radio interview he was found living under a rock outside James’ flat. This seems unlikely as he was brewing real ale for a local brewery at that time so he was either at the pub or stirring a mash tun.

As Lawrence put it

‘Paul, if I knew where we’d found you I’d be happy to talk about it…   turned up at band practice one day and there he was, a glowing guitar player’. 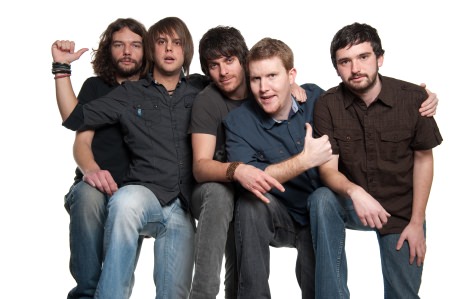 What started out as a bit of fun soon got very serious when they realised they really had something. They tried out their sound in a cellar to 30 or so of the local crowd and word about them soon spread. They arranged their first proper gig at the (now sadly closed) Tumbledown in the hope that someone would show up and they wouldn’t be out of pocket.  Well over 200 people did turn up but unfortunately a shambles of a fight broke out. When the doors were thrown open to evict the unwelcome ne’er do wells, those queuing in the street were able to get in free! Fired up with the success of that night, The Fins put a rehearsal and recording schedule together. Many gigs have followed and whether playing to 50 people or 5,000, The Fins drive and energy is evident in their performance. Their professionalism and talent has gained them a good reputation in the industry. The 2008 single ‘Adaptor’ was played on national radio and their video on TV.

They are aware that it’s not always about headlining gigs. They’ve played support gigs too, for Supergrass, The Rifles, Reverend and Makers, Bez, Mani to name but a few. Some of the more extraordinary gigs have included turning on the Christmas lights in a local high street and as the ‘alternative’ band for a Halloween spectacular for Churches Together. It hasn’t always been without incident either. One  memorable gig has to be the one that ended with police marksmen shining lasers on the band as they loaded the gear at the end of the night, the result of an overzealous CCTV watcher who couldn’t tell the difference between bass guitar and a Kalashnikov. Fortunately the police could.

It’s not always all about The Fins either. Asked to support a local sponsored walk for the Cystic Fibrosis Trust, The Fins fans (amazed the band could walk 10 km and play the guitar) chipped in over £1000 of the money raised.

Given their track record you might expect The Fins have been raking in the cash.

With their album ‘And when you get to the end’ being released in December 2010, how can they do it?

The truth is they are all grateful they have day jobs. In a world where recession has hit in all corners, they managed not to make a loss with their successfully self-released single ‘Adaptor’ in 2008. Not one of the critics guessed the single was recorded in bassist’s front room and produced in the drummer’s old bedroom. This band has talent.

They produced their own CD and worked out their own marketing, getting the single on sale through major retailers, played on radio stations and the accompanying video on TV.  Even though they can pare down recording costs, mastering, printing, advertising and circulation don’t come cheap.

Gigging and touring has a price too, a loss of earnings for the self employed members of the band, the others losing their annual leave. They all chip in to a band kitty each week to help offset costs but even though accommodation is sometimes a shared room in a hostel, fuel and vehicle hire soon mounts up.

The Fins work hard to find their own opportunities.  As Lawrence (AKA Loro) explains,

‘We’ve done the pay-to-play gigs. It’s hard for a band starting out. You’d think if you said you’ll turn up and play free it would be enough. The venues say ‘yeah you can play – if you bring 50 of your mates’. We’ve moved on from that. People know who we are now and it may not always be much but now we get paid to play.’

What does it feel like to play to a huge crowd for the first time if like Ryan, you’re the lead singer and front man?

‘A great buzz, no better feeling than rocking out ourselves and having the audience join in!’

“Perhaps the band’s uniqueness may also lie with the versatility of front man Ryan’s voice, as he is able to jolt from melodic to guttural with the same speed and ease as the band’s relentless backdrop of drum rolls.” Gig Review

And just how do you get a professional sounding recording on a shoestring?

‘It’s all about knowing your equipment and then you can get the best possible sound out  of it, as opposed to some one who has the best equipment and doesn’t know what to do with it.’ says Rauf, songwriter, bassist and the man responsible for recording the tracks. It certainly helps if you’re recording high quality artists.

‘Take Macca – he could play through any [guitar] amp and he always sounds amazing.  His playing makes his sound; it’s not the quality of the gear. All of what Macca does, his style, it’s mental, he sounds like no one else.  And Ryan’s voice, he has such great presence and projection, I could record it from halfway down the street and it’d still be awesome.’

Other things you might not know about The Fins…

Paul: “I caught a fish that weighed more than me”

Ryan: “I tried out for England”

James: “I was too ‘ unpredictable’  to be Head Boy”

Lawrence: “I have double jointed elbows and thumbs”

And when you get to the end?

“Powerful, explosive, thought evoking, and sends a slight shiver down my spine. If I had hair it would probably be standing up on the back of my neck right now. A nice piece of work.” Mcloughlin.